In early Connecticut history, the family of Dr. Daniel T. Porter, ancestor of ourvillage founder by the same name, Daniel T. Porter, was among those thatsettled in a small village along the Connecticut River named Mattabeseck. Thatemerging settlement became known to those settlers as Middletown. Another influence in Porter family history, was the Mohegan Sachem named Mamohet Weyonomon, great-grandson of the Mohegan, Sachem Uncas. Mamohet Weyonomon became well known to the colonists as “Mahomet”, an ally and negotiator for the Mohegan. The Porter families of Connecticut carried the legend of these historical names throughout their westward migration.

In the spring of 1832, a band of settlers, including the Daniel T. Porter family, traveled from Indiana to put down roots in this Sangamon timber. They would be the first to settle along this section of the primitive trail that would become our village. It was not, though, until March 10, 1836 that Daniel T. Porter, a descendant of the Connecticut Porter family, would obtain the services of surveyor, Garrett Moore, to lay out the plat of a new village on this site consisting of 38 lots straddling the ancient trail that had become known as the Fort Clark Road. He would name this new village “Middletown” after the Middletown known by his ancestors.

Four years later, in 1840, Porter in his application for a post office, chose to call the post office “Mahomet” after the family’s historical knowledge of the Sachem known as “Mahomet.” The existence of Middletown as our village name and Mahomet as our post office name remained in place until 1871 when the newly arrived railroad insisted that the name of Middletown could not be used for the depot name due to its policy not allowing duplicate names within the same state. As a result, on March 7, 1871, Supervisor, Theodore M. Brown, presented a petition to the Board to change the name of our village. The report was unanimously approved, giving our village its historical name of Mahomet. 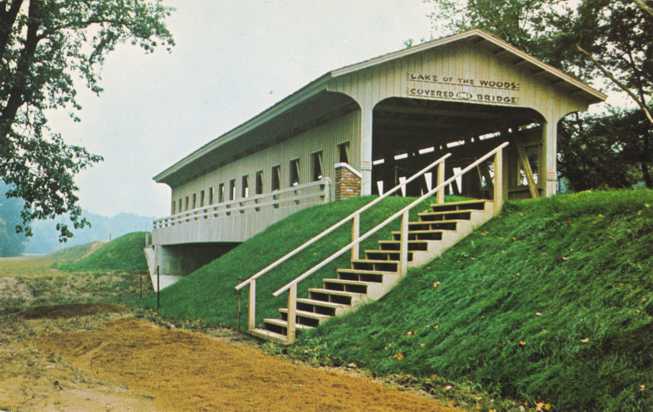 The early settlers chose Mahomet because of its water (Sangamon River) and fuel (timber). The settlers came primarily from Indiana, Ohio, Virginia, Pennsylvania and Kentucky. Before them, Indians roamed the land, including the Kickapoos and Pottawattamies.

This information about the history of Mahomet was obtained from the following sources: Mahomet Sesquicentennial 1832-1982, by the Mahomet Historical Society; Mahomet Methodist Church Centennial 1955, by Isabelle S. Purnell; Sangamon River People by Charlotte Nesmith Williamson; and ‘Middletown Becomes Mahomet’, by Dan McCollum. These books and articles and many more on the history of Mahomet and Champaign County can be found at the Mahomet Public Library.

Mahomet Township is situated northwest of the geographical center of Champaign county, and is one of the most fertile and productive in the county. The surface is rolling prairie, and the soil is a rich prairie loam. Very little, if any land in the township is unfit for cultivation. The Sangamon River enters the township near the north-east corner, and runs through it in a south-westerly course, and is a stream of considerable size, with here and there along its banks good facilities for water-power, which have been utilized at the village of Mahomet, where is located a flouring mill of good size and capacity.

The first settlement was made about 1830, since which time its improvement has been both rapid and substantial. The character of the people, who came principally from the Middle, and some from the Eastern States, is excellent, and the entire township bears evidence of their thrift and energy. The principal products are corn, oats, wheat, rye and barley, and considerable attention is given to the raising of fine stock. Among the early setters were Henry, Jonathan and James Osborne, Jesse Tompkins, Jonathan Maxwell, John Mead and John Bryant, all of whom had families. Jesse Tompkins was the first person who died in the township, and is buried on what is now the farm of Thomas A. Davidson, in section 22. Charles Parker was the first preacher, and belonged to the Methodist Episcopal denomination. George Cooper taught the first school. Dr. N. H. Adams was the first resident practitioner of medicine. The first house was built by Henry Osborne, and the first school-house was built in 1837, on section 14, and was called District No. 1.

The first church was built by the Baptist denomination about 1840. Amasa built the first saw and grist mill in the same year. In 1835 was opened the State road from Urbana to Bloomington—the first in the township—and the first county bridge was built across the Sangamon about the year 1850. The first school district was formed by Jonathan Maxwell, T. S. Scott and John G. Robertson. Daniel T. Porter was the first postmaster, and also kept the first store; John Bryant the first tavern, and Jonathan Maxwell the first blacksmith shop. In 1836 Mr. J. V. Williams brought the first improved stock to the township—Short-horn, or Durham cattle—since which time large editions have been made, until now almost every farmer has his blooded horses cattle, sheep and hogs.

The township is one of the most desirable in the county, if not in all the State, for the farmer and stock-raiser. The moral standing of the people is good. All of the orthodox denominations are represented—Methodist, Baptist, Presbyterian and Christian; all have communicants, and most of them houses of worship. The schools are in a flourishing condition, and have few, if any, opponents, the people generally recognizing in them one of the chief bulwarks of the Republic.

Mahomet, a thriving village situated on the west bank of the Sangamon, and about twelve miles from the county-seat, is the principal one in the township. It was originally called Middletown, and was laid out in 1832, by Daniel Porter. It has about 800 inhabitants, two flouring mills, one grain elevator, and eight stores, whose annual sales aggregate $50,000; one graded school, three churches—Presbyterian, Methodist and Baptist; two wagon shops, and one plow works. The Masonic and Odd Fellows’ Orders both have lodges, with a good lodge-room. The business portion of the village was entirely destroyed by fire, but has since been rebuilt in a more substantial manner than before. About 1875 the drug store of A. Lewellen, Jr., was burned, together with a man named Henry S. Wilson, who was sleeping in it at the time. The accident gave rise to much speculation, and some mystery surrounds it, but no satisfactory or definite reasons have ever been assigned for the catastrophe.

A most distressing and fatal accident occurred February 27th, 1866, which resulted in the death of a most estimable young lady, the daughter of John W. Park, Esq. On the evening mentioned, a party of folks, some eight or ten in number, from the village and neighborhood, started in a two-horse wagon to go to a spelling match at Adams’ school-house. Upon crossing the bridge over the Sangamon River, just east of the village of Mahomet, they encountered another team coming from the opposite direction. In endeavoring to pass each other, the wheels of the wagons, owing to the narrowness of the bridge, became locked, and in endeavoring to extricate themselves, the coupling-pole of the wagon which the party of young folks were in broke, and the hind wheels, together with the wagon-bed and all in it, fell into the river some distance below, and which was full of running ice. Joseph Stacker, one of the party, managed to reach a sycamore tree, and as the girls’ heads appeared above the water, he caught them and pulled them to him. They clung to him, when it was discovered that one of their number was missing. He shouted for help, in order to rescue her, but it did not arrive in time. Upon getting to shore they discovered the missing one of their young companions was Elizabeth Ann Park.